Hollow star ratings are awarded where brands do not receive the minimum number of responses for that criteria, however achieve at least the minimum sample required for all other criteria. 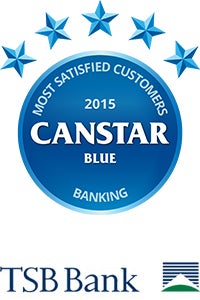 Modern banking allows us to transfer funds, manage our loans and receive our pay more easily than ever before. With growing numbers of New Zealanders using online and mobile banking, including 65% of Gen Y’s who told us they frequently do their banking on the go, it’s never been more important for Kiwibanks to be keeping abreast of the competition in areas such as technology, customer service and more.

Being a key institution used by virtually every working adult, banking is an area in which we want to get the best deal possible when it comes to the fees we pay and the service we get. At Canstar Blue, our customer satisfaction ratings are based on what everyday New Zealanders think of their bank’s services, allowing you to make informed decisions on which bank provides the most satisfaction to their customers. In terms of overall satisfaction, we found one institution which was considered superior to the rest in 2015. TSB Bank topped our overall satisfaction scores with a maximum five-star rating, as well as securing outstanding results in several other criteria. Just behind the winner were The Co-operative Bank and Kiwibank, each of which secured a strong four-star rating overall. Following these two were BNZ, ASB, Westpac and ANZ, with all four securing three stars in terms of overall satisfaction. Check out how each brand scored in our criteria using our full breakdown below.

The bread and butter of a bank’s operations is their in-person service at the local branch. Even in the age of online banking, there’s no easier way of sorting out a problem that talking to a friendly bank teller. The Co-Operative Bank seems to have recognised this more than any other, scoring five stars for its branch service, whilst TSB, BNZ and ASB each achieved a four-star rating. Kiwibank, Westpac and ANZ were next up on three stars.

The next best thing to a face-to-face chat is talking to a helpful representative over the phone; TSB and The Co-Operative Bank were no slouches when it came to the helpfulness of their call centres, scoring five stars and four stars respectively. The remaining banks achieved three star scores for their service.

One of the most important products that a bank can offer these days is a robust, user-friendly online banking interface. With computers and internet access in the vast majority of homes, New Zealanders are finding it easier to bank online than ever before, and the consistently strong satisfaction scores amongst our banks reflected this. TSB secured five stars for the best internet banking experience, and all other banks achieved four-star ratings in a very impressive display. If you’re looking to manage your money online, New Zealand’s banks have got you covered.

The way problems are dealt with and fixed

Accounting for a quarter of our overall satisfaction rating, the effectiveness of problem resolution was the most significant factor in people’s satisfaction with their bank. Occasional errors in fees, statements and correspondence are unavoidable for institutions that manage thousands of customers, so it’s vital that banks have robust service to fix customer problems. This was a particularly strong area for TSB and The Co-Operative Bank, both of which scored the maximum five stars. Next in the pecking order were ASB, Kiwibank and BNZ with four-star ratings for their problem resolution, followed by ANZ and Westpac with three stars each.

Fast response to people’s queries is a sign of commitment to customer satisfaction, so it’s no surprise that this was another significant contributor to each bank’s overall score. The Co-Operative Bank was considered the most efficient when dealing with customer enquiries, scoring five stars as a result. Following them was TSB with a four-star rating, along with the remaining banks on three stars.

A big thing for younger customers including Gen Y and Gen X, banking apps for mobile phones and tablets are another popular option for managing your finances whilst out and about. Mobile interfaces are often more intuitive than browser-based services but can also lack some functionality, so they’re good for quick tasks such as transferring funds and checking your balance. The most useful mobile banking apps were offered by BNZ and ASB, both of which secured five-star ratings in this area. Technological prowess was also on display from four-star achievers TSB, The Co-Operative Bank and Kiwibank, whilst Westpac and ANZ achieved three stars.

People don’t like being charged fees on their banking services as a rule, but even in an area which traditionally attracts some negative opinion, there are still institutions that stand out for their commitment to keeping things affordable. The low fees of overall award winner TSB provided the most satisfaction to customers and netted them a five-star rating, just ahead of Kiwibank and The Co-Operative Bank with four stars each.  Following the high achievers were BNZ and ASB with three stars, and finally Westpac and ANZ on two-star ratings.

Interest rates are another area in which we’re perennially looking for a better deal – whether it’s a lower rate on your home loan or a higher return on your savings. Fortunately, The Co-Operative Bank offers you a good option in this regard as evidenced by their five-star rating for interest rate satisfaction, as do four-star achievers TSB and Kiwibank. Similarly to their scores for fee satisfaction, BNZ and ASB scored three followed by Westpac and ANZ on two.