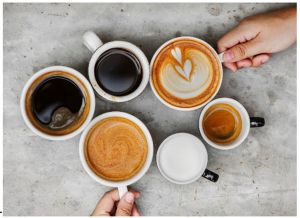 When it comes to different types of coffee, there’s more than one caffeine fix to get you through the day!

We checked online to see how many types of coffee beverages there are… it turns out, there’s quite a lot. Over thirty different types were listed on one website, and more than forty on another. To save us all some time, we will confine this list to the most commonplace coffees available, and what many Canstar Blue staff deem the most delicious.

Did we forget your favourite type of coffee? Let us know at enquiries@canstarblue.co.nz and we’ll add it to the article!

A fairly popular option for coffee drinkers, a latte consists steamed (or scalded) milk and a single shot of coffee. It is usually quite frothy, and you’ll occasionally encounter cafes that don’t understand the difference between this and a flat white.

Possibly the most popular type of coffee in the world, a cappuccino consists of three layers (kind of like a cake). The first is a shot of espresso, then a shot of steamed milk, and finally the barista adds a layer of frothed, foamy milk. This final layer can also be topped with chocolate shavings or powder. Traditionally, Italians consumed this type of coffee at breakfast.

To make an espresso, shoot boiling water under high pressure through finely ground coffee beans and then pour into a tiny mug. Sounds simple right? Well, it’s surprisingly difficult to master. Espressos are the purest coffee experience you can get, and while they’re not for everyone, it can be a truly singular drinking experience when you find a good brew.

The two most Kiwi coffees available are the long black and the flat white – as both originated in New Zealand and Australia. For a flat white, the steamed milk from the bottom of the jug (which is usually not so frothy, but rather creamy) is poured over a shot of espresso. It is now popular among mums and dads at school fetes who are desperately trying to stay awake. Hot water is poured into a cup, and then two shots of espresso are poured into the water. If you do the inverse of this, it will result in an Americano. Long blacks can be quite strong, and have more crema (a creamy foam that tops espresso shots) than an Americano.

A macchiato is a shot of espresso that is then topped off with foamed milk dashed directly into the cup.  Although it may sound similar to a cappuccino, it’s usually stronger as there’s no steamed milk added and it’s also smaller, usually served in an espresso-sized cup.

A ‘mocha’ is just a latte with added chocolate powder or syrup, sometimes topped with whipped cream. If anything, this is a good entry level coffee – living in the worlds between the childlike hot chocolate and the adult café latte.

Once the long black sheep of the coffee family, recently filter coffee has made a comeback, and has become a trendy tipple, especially if it’s cold brewed. Ground coffee beans are left to steep in either hot or cold water, then filtered out, leaving the liquid behind. The result is less harsh and bitter than espresso, but less watery than an Americano, and can be drunk black or with milk.

Too many of these and you might have to ‘just crash here, bro’, because this type of coffee is made with Irish whiskey, sugar, and a thick layer of cream on the top – and isn’t readily available in New Zealand cafes due to its alcohol content. They’re more often found in restaurants. Be warned, trying to make this with scotch and instant coffee doesn’t work … trust us.

A Vienna is made by mixing two shots of strong espresso, and then adding whipped cream as a substitute for milk and sugar. The Vienna melds the strong flavours of a straight espresso, with the smoothness of sugary cream.

Affogatos aren’t a coffee at all, really, as they’re a shot of espresso poured over a dessert (usually ice cream). That doesn’t make them any less delicious, though. This new star of the coffee world became an internet sensation during the COVID-19 lockdown, when people stuck for a caffeine fix started playing around with different types of coffee recipes at home. It’s made by whipping up instant coffee, sugar and hot water into a creamy froth and adding it to either hot or cold milk. It takes its name from the Korean word for honeycomb candy, which it resembles.

Okay, some caffeine snobs will turn their nose up at this one, but if you’re hiking or camping, or for emergencies at home, instant coffee is still better than no coffee! Instant coffee is coffee that’s had all the water removed, leaving behind just the soluble coffee flavour. Add the water back and, hey presto, something that tastes a bit like coffee!

Regardless of which type of coffee you drink, the cost of buying a cup of joe does add up. Every internet article ever written about easy ways to save money includes cutting out your daily bought brew. And, yes, we’re just as guilty of overusing the tip here at Canstar! And why? Because it does work, $5 per day five days a week soon adds up … to $1300 per year, to be exact, money you could put towards buying something less frivolous, like a first home, for example.

Which leads us nicely to …   if you’re looking to buy a first home, or any home, Canstar’s here to help. Click below to compare home loan rates for free! 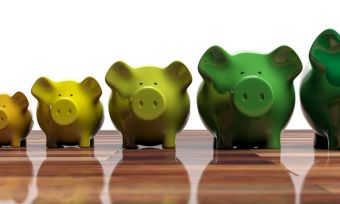