Have you ever tried soy milk? If you haven’t, we can tell you that contrary to what a lot of people would have you believe, it’s really not that bad. But it does divide opinion. It definitely doesn’t taste like cow’s milk, but that’s probably because it’s not from a cow. Anyone who expects it to taste like regular milk is most likely unaware of what it is and what it’s made from. So here’s what you need to know about soy milk.

What is soy milk?

Soy milk, or soya milk, was originally an East Asian beverage which has been part of Asian diets for centuries. It’s simply an emulsion of water, protein and oil (the latter two provided by the soybeans). It’s made by soaking dried soybeans for a minimum of three hours, and then grinding the beans with enough water to achieve a desired consistency. The resulting substance is boiled in order to improve its nutritional value, improve flavour and sterilise the milk. Afterwards it’s filtered to remove the pulp of soy beans.  The resulting liquid looks similar to cow’s milk, even if it doesn’t taste or smell like it. It also generally has a rather similar texture to milk, which means that its flavour aside, soy milk is one of the better options for those seeking the closest thing to cow’s milk.

How does soy milk stack up health-wise?

Soy milk offers a number of nutritional benefits when compared to cow’s milk, even if there are a few drawbacks. The two are more or less on par when it comes to calories, but soy milk is much lower in carbohydrates and fat, with one cup of soy milk having 5g less fat than a cup of cow’s milk. Cow’s milk has only a smidge more protein, and you might have been able to guess that it has much more calcium than soy milk. Soy milk contains all the same essential amino acids as cow’s milk, albeit in smaller amounts, and has twice as much folate as any animal milk.

However, it’s worth noting that the above only applies to soy milk that hasn’t been tampered with or fortified in any way. Commercial soy milk is often adjusted with sugar to bring its fat and carbohydrate levels more or less up to par with cow’s milk, and vitamins and calcium are added in order to achieve a nutritional profile similar to that of cow’s milk.

This means that the main differences between soy milk and cow’s milk end up being the types of carbohydrates, protein and fat found in the two milks, rather than the amounts. Dairy contains lactose, a form of sugar which is troublesome for those with lactose intolerance. Soy milk is lactose free, making it an invaluable alternative for said individuals.

Soy milk and dairy milk also contain very different proteins. The former contains soy protein, while the latter contains casein and whey protein. Soy protein has been found to have a positive impact on heart health and the phytoestrogen found in soy protein can help soothe hormonal swings during menopause. Casein and whey protein, on the other hand, have been shown to be particularly effective at building muscle and promoting fat loss as part of a controlled diet.

The fats found in soy milk are regarded as ‘good’ fats, with soybean oil being mostly polyunsaturated, and the fats added to soy milk also generally being either polyunsaturated or monounsaturated. The fat found in milk is butterfat, which is high in saturated fat, but full fat dairy foods have been found to not increase the risk of heart disease the way other sources of saturated fats do, making them less of a worry.

Is soy milk right for you?

At the end of the day, the soy milk you pick up at the supermarket is generally rather similar to cow’s milk in terms of its nutritional and health value, which means that unless you’re lactose intolerant, vegan, or simply have a preference for the taste of soy milk, making the switch probably won’t reap you any staggering benefits. However, soy milk usually has a much smaller carbon, water and phosphate footprint when comparing its production process to that of cow’s milk, so if you’re environmentally minded, that’s a consideration. 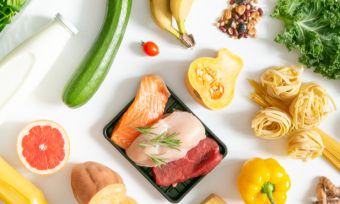