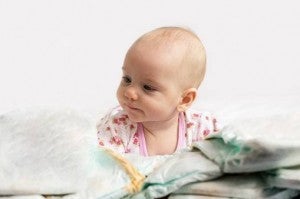 Some may take nappies for granted, and others can’t live without them. Up until the 1960s, parents had no alternative but to use cloth nappies because disposables had not even hit the market. So what makes up this vital baby supply?

The absorbent pad is the most important part of the nappy, as it is what absorbs and retains all of the moisture.

It is generally made of synthetic polymers that absorb more than most natural fibres. Yes, the inside of a nappy is actually plastic, and it involves a lot of chemicals such as sodium acrylate, potassium acrylate, and alkyl acrylate.

Along with the hydrophilic (water-absorbing) plastic, the core of a nappy contains wood pulp – a fibrous material that gives the core strength.

While the polymers in the core act as microscopic sponges, the wood pulp not only keeps the nappy from falling apart. It does this by drawing liquid into the centre of the polymer pad, so all of the space is used, and a barrier doesn’t form around the outside of the absorbent pad.

The Outside of the Nappy

We have moved on from using paper to make disposable nappies, as nonwoven fabrics are now used. A non-woven fabric is typically made from plastic resins (nylon, polyester, polyethylene, and polypropylene) that are assembled chemically to interlock the plastic fibres.

Making nappies involved a process called dry-laying, which uses a great deal of energy. First, the plastic resin is melted and pushed through tiny holes; as these air-blown fibres cool off, they are condensed into a sheet.

To then flatten these fibres, a heated roller is used; it bonds them together. From here, the exterior part of a nappy can be cut into the sheet, before an absorbent core is placed in between two sheets of synthetic fibres.

The other components of nappies include elastic threads, hot melt adhesives, inks, and adhesive tapes.

You can check out our survey results here.