Microsoft’s Xbox Series X and Sony’s PlayStation 5 both arrive later this year. Canstar examines what gamers have to look forward to!

It’s shaping up as a bumper year for gamers, with both Microsoft and Sony slated to release their respective next-gen Xbox Series X and PlayStation 5 consoles in the lead-up to Christmas. And as excitement has built, the two tech companies have revealed more and more about their new machines.

New console generations don’t come around as often as many other tech releases, such as phones (barring updates within generations). As the current-gen Xbox One and PS4 originally launched in 2013, great leaps in power are poised to underpin the upcoming era of console gaming.

Based on what we know so far, the Xbox Series X and PS5 will be primed to deliver an increasingly immersive experience, with hardware upgrades paving the way for more encompassing gaming worlds, and enabling faster and more responsive game play.

Read on for further details about what is officially known about each of the consoles: The Xbox Series X and PS5 will land in a vastly different gaming environment to the previous generation of consoles, with consumers having access to an evolving range of options when it comes to playing some of the latest games.

Consoles have, of course, long faced competition from PCs, and now cloud gaming services, such as Google’s Stadia and Nvidia’s GeForce Now, are also jostling for market position, bringing gaming to an increasing range of devices.

Game streaming bypasses the need for disks and downloads, and both Sony (PlayStation Now) and Microsoft (Project xCloud) are also notably active in this area, with the two rivals even collaborating to explore cloud-based gaming solutions.

Meanwhile, 8K looms somewhere on the horizon, virtual reality and augmented reality are being harnessed to deliver ever-more immersive gaming experiences, and other services, such as game subscription service Apple Arcade, are staking out their claims in the market.

All of which means that Microsoft and Sony will have their work cut out for them in seeking to make an impact with the next generation of consoles. Microsoft Head of Xbox Phil Spencer last year revealed that the Xbox Series X will support vertical and horizontal orientation, and will come with a new wireless controller, sporting a refined size and shape, along with a new Share button for simple capturing of screenshots and game clips, and a hybrid D-pad.

The Xbox Series X will also be backward compatible, with four generations of gaming supported, while Smart Delivery, used on all exclusive Xbox Game Studios titles, will allow players to purchase a title once, and then play the best available version on their Xbox console of choice.

Meanwhile, Microsoft’s Xbox Game Pass subscription service will continue to have its first-party games, such as Halo Infinite, included at their launch.

Spencer has also advised that “more playing and less waiting” has been the focus for Microsoft, with the Xbox Series X to feature: More titles can be expected to be announced closer to the Xbox Series X’s release, with Halo Infinite, Senua’s Saga: Hellblade II, Outriders, Cyberpunk 2077 and a remake of Gothic among the games to have already officially been locked in.

As it stands, the Xbox Series X is set to be released in the holiday season (likely from November onward), with pricing yet to be announced.

Until recently, Sony had been less forthcoming about the details of its new baby, and although Sony recently released an image of the new controller (below), the design of the main machine is still unknown.

Among the most recently released details is the fact that the Dual Sense controller features haptic technology, designed to deliver a broad range of feedback, even conveying a sense for a variety of textures, from running in grass to plodding through mud.

In addition to this, adaptive triggers have been incorporated into the trigger buttons (L2/R2), with the resistance of the triggers capable of delivering tactile sensations, such as drawing a bow and arrow, or accelerating an off-road vehicle through rocky terrain.

Cerny additionally advised that with the PS5 based in part on the PS4’s architecture, it will be backward compatible with at least 100 of the most played PS4 games on release, while the current PlayStation VR headset will be compatible with the new console.

Cerny also confirmed that the PS5 will feature: Among the games that have, at time of writing, been confirmed for the PS5 are Godfall and Outriders, in addition to the remake of Gothic, and more can be expected to be confirmed as the console’s launch draws nearer.

Get ready for the next generation in gaming

If you are planning to purchase a Xbox Series X or a PS5 next summer, you’ve plenty of time to start saving … and also upgrade your broadband. Because to make the most of your new console, you’ll need ultra-fast broadband and unlimited data.

To help you choose the best internet provider, Canstar rates broadband providers on categories including Value for Money, Network Performance and Flexibility of Contract. To check if you’ve the best possible provider to meet all your gaming needs, just click on the button below! 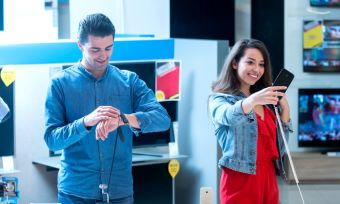 Kiwis and Gadgets: What Do We Look For in an Electronics Retailer?