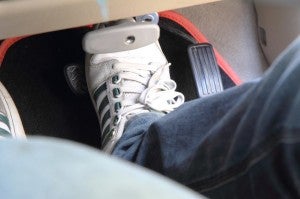 Have you been taught how to brake properly? John Cadogan from AutoExpert offers his tips.

It’s perverse that the correct procedure for stopping in an emergency is never taught to learner drivers – even though, from a risk management point of view, this is one of the most vital skills a driver can possess. After all, when all else fails, out there on the road, the one thing you need to do effectively is stop. Driving is optional, but stopping (in one form or another) is mandatory.

Here are the top eight things you need to do to execute a textbook emergency stop.

Drive the most advanced car you can afford

Engineers have done an outstanding job improving the physics of brake application over the past two decades. From simple anti-lock brakes in the mid-1990s, cars have evolved to include a suite of advanced braking features including ‘autonomous emergency braking’, ‘emergency brake assist’ and ‘electronic brake-force distribution’, etc., all of which slash stopping distance. (These kinds of systems are generally packaged in cars that are also safer if you don’t avoid the crash.) Tyre technology has advanced tremendously, too.

Unfortunately, both brakes and tyres wear out – so don’t scrimp on service. Also, check your tyre pressures at least every two weeks, and inflate to the pressure recommended on the vehicle’s tyre placard (it’s hidden in plain sight in the driver’s door frame…) It’s vital to realise that grip is the first casualty of tyre under-inflation – so, just a small amount of under-inflation can have a big effect on stopping distance and braking stability.

I did Wheels magazine’s tyre tests in collaboration with tyre industry engineers, for five or six years. Over and over it was conclusively demonstrated during our controlled tests that the brands you know and trust – including Bridgestone, Dunlop, Goodyear, Pirelli, Michelin, Continental, Kumho and Hankook, etc. – out-performed the cheap knock-off brands you’ve never heard of. And retreads – for passenger cars and SUVs – are simply unconscionable.

At times during emergency stops you might need to swerve. It’s impossible to do that, competently, one-handed. (It’s particularly hard to recover control after swerving, one-handed.)

Four things to know about your car tyres

Look further down the road ahead

More distance gives you more time to assess the unfolding dynamics of the road environment, and sidelines the need for many emergency stops.

Drop back from the car in front

Many emergency brake applications result from driving too close to the car in front. Drop back – you won’t get where you’re going any quicker by tailgating. You might not get there at all.

Any time something looks risky ahead, lift off the gas and cover the brake pedal. It takes about one second to do that – and at 100-110km/h doing this effectively buys you about 30 metres (six or seven car lengths) of additional stopping distance. Not even the engineering miracles of emergency brake assist, et. al., mentioned above, can deliver that kind of additional brake performance. Even at 50 km/h in the suburbs, buying an extra second in this way delivers about 15 metres of reduced braking distance. In both cases it can be the margin between a near miss and an unmitigated tragedy.

Many people don’t brake hard enough, early enough, during an emergency. You can’t damage the brake pedal by pressing too hard. In a modern car, brake as hard as you can, as early as possible into the event. (Technology will prevent the wheels from locking and also help keep the car stable.) In an old car without anti-lock brakes – ABS – it’s necessary to be more sensitive, and brake only up to the point of wheel-lock – otherwise steering control is lost.) So, if all else fails, and your car has ABS: punch the brake pedal as hard as you can, if you need to stop in a critical situation. If it comes to that, it’s the best way to stop quickly.