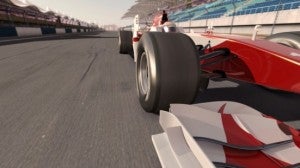 Formula 1 has been the highest level of competition in motorsport for decades. The sport has become a constant innovator in automobile technology, continually pushing the boundaries of what’s possible. Modern F1 cars are far removed from the one you drive to work every day, with their huge amounts of downforce, high-revving engines and incredibly lightweight construction, and it’s no surprise that another specialised piece of equipment is their tyres. So what goes into the construction of an F1 tyre, and does it bear any similarity to the ones on your family sedan?

First and foremost, a Formula 1 team can’t just pick out some rubber from their local Bridgestone. Unlike the rest of an F1 car, which teams can build however they want (within the regulations), all F1 tyres are supplied by Pirelli to create a relatively fair playing field. The company has four different types of dry-weather tyre, ranging from super soft to hard, and they supply two of these types for each race depending on the characteristics of the track – they also supply an intermediate tread and a full-tread tyre for wet conditions, which teams can use if they desire. As a general rule, softer tyres provide better grip, but harder tyres are more durable; what’s more, each team must use both types of tyre during a race, making it as much about strategy as it is about speed!

So why do F1 teams change their tyres so often, up to several times during a race? It comes down to one thing: durability. Tyres are the essentially the single biggest variable in a car’s performance, undergoing by far the most wear and tear of any one component. Road car tyres are designed specifically to endure this wear, with heavy reinforcement and significant tread depth allowing them to go for tens of thousands of kilometres between changes; by contrast, F1 tyres are designed for minimum weight and maximum grip. Low weight means construction that’s just strong enough to withstand the g-forces of F1, but not the constant wear and tear; high grip means dry tyres that are completely slick, with no tread on them at all, which results in maximum contact but also more damage to the tyre over time.

Lifespan of an F1 tyre

An F1 tyre’s lifetime is so short, the Formula 1 website states that they’ll only last between 60 and 120 kilometres depending on the tyre compound – that wouldn’t last you long on your daily commute! Another other main reason for frequent tyre changes is weather conditions; if it starts to rain during a race (not uncommon), teams need to switch to one of the two wet-weather tyre sets. Even in the wet, F1 tyres are at the ragged edge of performance – their tread pattern is optimised to displace as much water as possible, with Formula 1 stating that the full wet tyre can disperse up to 65 litres per second!

Not only are F1 tyres built differently to your car’s tyres, they’re even prepared differently. Pirelli fill their racing tyres with a nitrogen-rich air mixture which less susceptible to temperature and pressure changes than normal air. Teams also wrap their tyres in electrically heated blankets before use, to heat them to the optimum operating temperature where they’ll have maximum grip. They really are worlds apart. But whilst Formula 1 is worlds apart from consumer cars, the technology that the competition develops eventually trickles down to road cars. Things such as carbon-fibre construction and brake energy recovery systems have already made their way into the mainstream, and it’s a similar story with tyres – today’s tread designs and tyre compounds result in less fuel consumption and better grip, making driving a better experience for everyone.  So whilst there’s plenty of difference between Formula 1 tyres and the ones fitted to your car, they’re more similar than you might otherwise think.

To find out more about the F1 know-how in today’s tyres, feel free to check out our consumer ratings of Australian tyre retailers.