Canstar Blue surveyed 2500 Kiwis about their decision making when it comes to selecting and maintaining a car. And, while men seem to have their eyes on their wallet – and the pump prices – it’s fuel economy that revs up the ladies.

Some 59% of the men who responded to the question say they actively monitor fuel prices, compared with only 46% of female respondents. On the flipside, only 54% of men would hesitate to buy a car that wasn’t fuel-efficient, compared with 62% of women.

But women may not be helping their cause with fuel efficiency. Canstar Blue’s survey found that 94% of men are aware that the correct tyre pressure affects how much fuel they use, compared with only 87% of women.

And in the battle of the sexes, men triumph when it comes to tyre changing – 69% of men know how to change a tyre, compared with only 44% of women.

Don’t get between women and their food 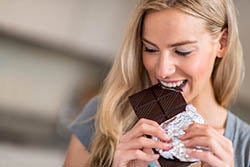 The saying might be that the way to a man’s heart is through his stomach, but it turns out the same formula works to avoid a row with women.

That’s right; women pick up the dubious honour of being the most “hangry”. Nearly one third of women Canstar Blue surveyed admit to suffering from “hanger” – getting angry when hungry – compared with only 17% of men.

And a word of advice, maybe make the food of choice something of the chocolate variety for the special lady in your life. Around six in 10 women say chocolate is their go-to guilty pleasure food-wise, compared with only 40% of men.

Smelly gyms turn up noses of more women than men

While we’re on the subject of what pushes the buttons of men and women, a smelly gym gives ladies’ patience a workout.

Some 44% of women Canstar Blue surveyed say their top pet hate is a smelly and untidy gym, this compares with only 31% of men.

When women and men are on the same page…

For all the differences between venus and mars, men and women, there are, of course, times when both genders live harmoniously on the same planet – or are on the same page for a few minutes, at least.

Maybe we’re not that different after all…