Daikin heat pumps deliver satisfaction to the power of five 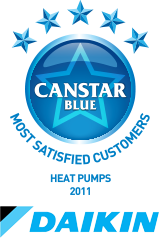 The survey also revealed that 43% of respondents feel anxious whenever they receive their power bill during the winter months. In addition, over half of Generation Y respondents were concerned about their power bill, as opposed to only 41% of Baby Boomers.

Despite this, heat pump owners are using their devices all year round, with three out of five respondents using their heat pumps to cool the house in the warmer months. The survey also found that kiwi men are more likely than women to turn on the aircon in the hotter months.

Daikin customers have proved to be the most satisfied with their heat pump overall, as well as their unit’s after sale service, reliability, ease of use, functionality, and noise. Daikin heat pumps also received five stars for energy efficiency. That’s an accolade consumers will be looking for when they’re searching for a device they can use throughout the year.

Canstar Blue commissions Colmar Brunton Australia to survey 2,500 New Zealand consumers across a range of categories every few months to measure and track customer satisfaction. The outcomes reported are the results from customers of heat pumps within the survey group. To qualify, the customer has to have purchased a domestic heat pump within the last two years.

Results are comparative and it should be noted that brands that received three stars have still achieved a satisfaction measure of at least six out of 10.

According to our survey, Daikin customers are most satisfied with their unit. Daikin received five stars for overall satisfaction, while Fujitsu received four stars, and Panasonic received three.

Fujitsu customers were most satisfied with the purchase price of their heat pump, and received five stars. Daikin and Panasonic both received four stars for price.

Daikin customers were happiest with the reliability of their units, with the brand receiving five stars for reliability. Fujitsu were similarly well received with four stars, and Panasonic received three.

Feedback in the survey showed that complicated instructions and remote controls were a big problem for some respondents. Both Daikin and Fujitsu received five stars for ease of use, and Panasonic received four stars each.

Daikin received five stars for functionality, while Fujitsu and Panasonic all received four stars each.

It’s all well and good to be nice and snug in your home, but a whisper quiet heat pump is worth its weight in gold. Customers who bought a Daikin unit were most satisfied with the amount of noise produced by their unit, followed by Fujitsu with four stars and Panasonic with three stars.

When it comes to running a heat pump, Daikin customers were most satisfied with energy efficiency. Fujitsu followed closely with four stars and Panasonic received three stars each.