Compare dehumidifiers in New Zealand with Canstar Blue. Panasonic, DeLonghi, Dimplex, Goldair and Mitsubishi Electric were compared on value for money, reliability, ease of use, functionality, quietness and overall satisfaction.

This year Panasonic have been awarded the Canstar Blue Customer Satisfaction Award with an impressive five-star rating in every category.

Who doesn’t like being warm and dry?  In a world of conflicting opinions, I think we can all agree that whether it’s hot or cold, humidity usually makes things more uncomfortable.  Luckily for us, in the 1950’s someone invented the dehumidifier, a machine that extracts moisture from the air to reduce humidity. But, where most of us may think of humidity as a summer thing, it can also cause big problems in the winter too.  When it’s cold, often our first thought is to put the heater on, but heaters don’t help with humidity and damp and it’ll also cost you a lot more to heat a damp room than a dry one.

Worryingly, almost half of the people surveyed, told us they occasionally experienced mould (a symptom of a damp) in their home and a further 17% said it was a regular occurrence.

Mould inside your home can be a serious health risk and contribute towards chest, throat and nasal infections.  In serious cases, prolonged exposure to mould can cause problems with your lungs and exacerbate serious conditions such as asthma, so it’s important to take steps to keep your home well ventilated and dry, and that’s where dehumidifiers can help.  Two thirds of the people we surveyed said they have noticed a positive difference since they started using a dehumidifier.

Reasons to dehumidify your home

There are a few surprising reasons as to why you should use a dehumidifier that we thought you should know about.

Don’t forget though, as well as using a dehumidifier, it is essential to get good airflow moving through your house and this can easily be achieved by opening windows for around 20 minutes each day.

There are two main types of dehumidifiers to consider.

Refrigerant Dehumidifiers. These work by condensing moisture out of the air.  Damp air is sucked into the dehumidifier and is cooled to below its dewpoint temperature by using a cold evaporator coil.  This of course causes condensation to drip into a water-holding pan which can either be removed manually or through a hose where the water is automatically removed.

Desiccant Dehumidifiers.  Slightly different to refrigerant, these dehumidifiers work by passing air through a rotor which contains moisture absorbent desiccant material.  After the moisture is removed, dry air can be blown back into the building, thereby converting damp air into dry air. Rather than being removed manually, water collected within the desiccant wheel is removed by adding heat so the vaporised moisture can then be removed from the room.

Pros and cons of each type

Refrigerant dehumidifiers use compressors which usually make them louder than desiccant.

These will vary depending on make and model and there are always discrepancies, but refrigerant dehumidifiers as a rule of thumb can extract larger amounts of moisture per day.  They are popular when materials need drying rapidly and in early stages of flood restoration.

Things to look out for

Canstar Blue commissioned I-view to survey 2,500 New Zealand consumers across a range of categories to measure and track customer satisfaction. The outcomes reported are the results from customers who have purchased and used a dehumidifier for domestic purposes in the last 3 years, in this case, 576 New Zealanders. 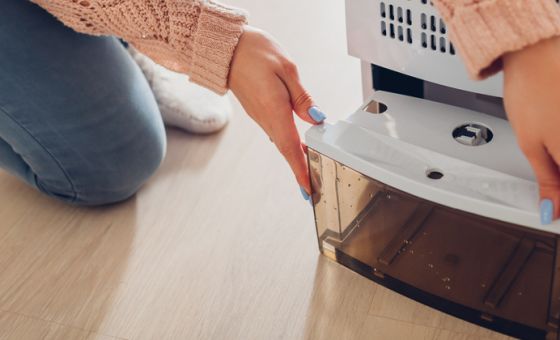 A Buyer’s Guide to the Best Dehumidifier For Your Home

Dehumidifiers are relatively cheap to run, easy to use, and can save you a lot of discomfort. Throughout the year, a dehumidifier can tackle mould and damp by ridding the air in your home of …