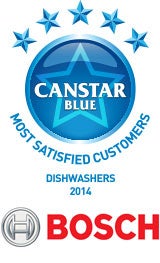 For the third year running, Bosch has secured our Most Satisfied Customers Award for Dishwashers – making it one of the longest running consecutive award winners in Canstar Blue New Zealand’s history.

The brand’s grand slam award-win this year included top ratings in nearly all our criteria, including performance (i.e. how well it cleans), reliability and quietness.

Also rated were LG (which received its own five-star rating for value for money), Westinghouse, Simpson, Haier and New Zealand’s own Fisher & Paykel. Our full report on these findings is set to be released later today.

Bosch has performed exceptionally well in our appliance ratings over the years, securing awards in many categories. Is it because of the breadth of its dishwasher product offering, spanning built-ins, compacts, freestanding and semi-integrated models? Or maybe it’s down to the company’s commitment to green technology and household energy efficiency. Whatever it may be, the brand consistently resonates with New Zealand consumers.

Bosch finished at the top of the table, with five stars for overall satisfaction, performance (i.e. how effectively it cleans), reliability, quietness while operating, internal layout of drawers, ease of use and warranty / service.

LG is an appliance and consumer electronics juggernaut, so much so that it’s statistically very likely you have at least one LG product in your house. Did you know that in 2013, worldwide sales for LG equalled $53.10 billion, which is more than the 2013 GDP of Luxembourg, Macau, or Paraguay?

LG is the only other brand (besides our award-winner) to achieve a five-star rating in these results. LG received five stars for value for money and four stars for overall satisfaction, performance, reliability, quietness, internal layout, ease of use and warranty.

“Made for family-sized occasions,” says Westinghouse’s website regarding its dishwasher products. In short, this brand is clearly catering to the regular Kiwi. Whether that’s a built-in or a free-standing model, New Zealanders can expect care and consideration from Westinghouse’s appliance design.

Fisher & Paykel has been a New Zealand appliances institution for many decades. Its product offering extends to all the common consumer appliances you could possible need in your home, and does so to the satisfaction of many homeowners.

Haier is a global manufacturer originating in China. Reportedly, this brand utilises smart design choices to provide consumers with the best product possible. Haier scored several four-star ratings in this category: for value for money, reliability, internal layout, ease of use and warranty. They also received three stars for overall satisfaction, performance and quietness.

Simpson supports several freestanding dishwasher products for New Zealanders, which have multiple place settings as well as the ability to effectively tackle the dishes for the average New Zealand home.

Simpson secured four stars for value for money, reliability, internal layout of drawers, ease of use and warranty. This brand finished with three-star ratings in the areas of overall satisfaction, performance and quietness.

How we rated dishwasher brands

Canstar Blue commissions Colmar Brunton using the SSI panel to regularly survey 2,500 New Zealand consumers across a range of categories to measure and track customer satisfaction. The outcomes reported are the results from customers within the survey group who have purchased and used a dishwasher in the last three years – in this case, 579 New Zealanders.