You are viewing the archived 2014 ratings for refrigerators. Go to the current fridge ratings.
Go to the current fridge ratings.
Show Important Notes^* Hide Important Notes^*
* Overall satisfaction is an individual rating and not a combined total of all ratings. Brands with equal overall satisfaction ratings are listed in alphabetical order. Hollow star ratings are awarded where brands do not receive the minimum number of responses for that criteria, however achieve at least the minimum sample required for all other criteria.

Hollow star ratings are awarded where brands do not receive the minimum number of responses for that criteria, however achieve at least the minimum sample required for all other criteria. 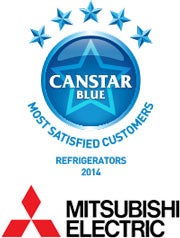 Some New Zealand shoppers are being a little short-sighted when it comes to their refrigerator purchases, according to our latest research.

For example, roughly two in three didn’t take into account what their new refrigerator’s energy rating was when purchasing. In other results, one in two don’t care what fridge they buy, so long as it’s the cheapest they can find.

Additionally, three quarters of respondents purchased their fridge to match another appliance in their kitchen in colour, brand, or appearance. While these things can be important, we encourage all shoppers to look out for a fridge that ticks all the boxes: value for money, energy efficiency, design, etc. This is especially crucial, considering 85% of these respondents own more than two fridges.

We’re here to help you select a winning brand, which is why we also asked these shoppers how satisfied they were with their fridge purchase.

This year, it’s Mitsubishi Electric who stole the show; achieving our Most Satisfied Customers Award – Refrigerators, 2014. When we say they excelled, we really mean it: Mitsubishi Electric finished with five star ratings across the board – from value for money to energy efficiency. The received this same award in 2013.

Also rated in these results were Westinghouse, Samsung, Fisher & Paykel, Haier, and LG. Notably, Haier finished with five stars for after sale service, and Samsung achieved five for the internal layout of its refrigerators.

We’ve gone into a little more detail about each brand below.

Westinghouse shared an award-win with Mitsubishi Electric last year, and continues a streak of appliance excellence in these 2014 results.

Alongside those who purchased a Mitsubishi Electric fridge, Haier customers were most satisfied with the after sale service of their refrigerator. This brand received five stars in this area and four stars for value for money, energy efficiency, and internal layout. Haier received three stars for overall satisfaction, performance and reliability, quality of fittings, and design.

LG received three stars in all of this category’s rated criteria.

How we rated refrigerator brands

Canstar Blue commissions Colmar Brunton using the SSI panel to regularly survey 2,500 New Zealand consumers across a range of categories to measure and track customer satisfaction. The outcomes reported are the results from customers within the survey group who have bought a new refrigerator in the last three years – in this case, 983 survey respondents.