Up for the Challenge: Service Station brand achieves our 2014 award

According to the results of our recent survey of petrol station customers, New Zealanders are going to great lengths to save money on petrol. 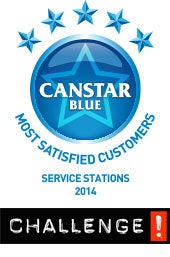 Some, like four in five of these respondents, do so by visiting particular petrol stations to take advantage of fuel discount dockets or price promotions. Additionally, a quarter of respondents are considering the even more drastic option of buying a different model car, or even switching to a motorbike or scooter to save.

However, it’s only enticed a little less than one in five to use public transport more than they had one year prior.

One other popular way to save money on fuel is to use less of it, with two thirds of our survey respondents choosing to avoid fast/aggressive acceleration to this end.

But perhaps all you need to do to save is find a service station that offers terrific value to New Zealanders everywhere. We’ve been on the lookout for you, asking everyday drivers in these results how satisfied they were with their petrol station.

Challenge achieved our Most Satisfied Customers Award – Service Stations for 2014, ahead of BP, Z Energy, PAK’nSAVE, Mobil, Shell, Gull, and Caltex. Notably, Challenge led the pack in the area of overall customer satisfaction, as well as customer service.

However, our other rated brands also impressed many drivers across the country:

The full results can be found below.

Gull flew ahead with a five star rating for the price of petrol at its bowsers. Next with four stars apiece were both Challenge and PAK’nSAVE, three star recipients Mobile and Caltex, and two star achievers Z Energy, BP, and Shall.

Whether you’re filling up at your local petrol station, or thousands of kilometres away on a cross-country road trip, good customer service makes for happier drivers. Both Z Energy and Challenge received five stars for service; both Shell and Caltex were hot on their heels with four. Next with three stars for customer service was BP, Mobile, and Gull, and then two star recipient PAK’nSAVE.

Some people like to reward themselves at the petrol station with a candy bar; others are more practical and restock on milk and bread. Most service stations are happy to accommodate for all kinds of shoppers.

Customers of both Z Energy and BP were most satisfied with the range of miscellaneous items available for purchase from their petrol station. Next in line after out five star achievers were Shell and Caltex with four stars each, then Challenge, Mobile, and Gull with three. PAK’nSAVE received two stars for its range.

Appearance and cleanliness of service station

Maintaining your car requires a little effort on your part, and having the facilities close at hand can only help. Z Energy and Shell both finished with five stars for their facilities, just ahead of four star recipients BP, Caltex, Mobil, and Challenge. Gull secured three stars, and PAK’nSAVE received two.

How we rated service stations

Canstar Blue commissions Colmar Brunton using the SSI panel to regularly survey 2,500 New Zealand consumers across a range of categories to measure and track customer satisfaction. The outcomes reported are the results from customers within the survey group who have refuelled a vehicle at a service station in the last month – in this case, 2,240 New Zealanders.

Brands must have received at least 30 responses to be included. Results are comparative and it should be noted that brands receiving three stars have still achieved a satisfaction measure of at least six out of 10. Not all service station brands available in the market were compared in this survey.