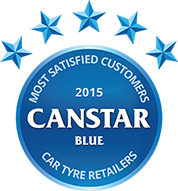 The results for 2015 are in, and we are pleased to announce that Tyrepower is the award-winner of Canstar Blue’s Most Satisfied Customers Award for Car Tyre Retailers. Tyrepower received five stars for value for money, range of tyres, point of sale service, after sales service, speed in fitting tyres and overall customer satisfaction.

Tyrepower on track with customer satisfaction

Three out of four New Zealanders rely on the recommendations of their retailer when purchasing new car tyres – so it’s important you find a mechanic whose knowledge you can trust.

Alarmingly, many Kiwis are not entirely conscious of the importance of tyre safety, with close to half of respondents to our recent survey admitting they delay replacing old tyres for as long as possible.

In addition, nearly 1 in 5 do not know when to check if they need new tyres and 30% don’t know what their tyre pressure should be. These figures jumped to 35% and 45% respectively when we asked those under 30 years of age the same questions.

Furthermore, one in four females don’t know if they need new tyres, compared to 13% of males, and 41% of women don’t know the correct tyre pressure, compared to 20% of men.

For anyone scratching their heads, this website explains how you can check the tread on your tyres with nothing but a 20 cent coin.

Kiwis are prepared for the worst, at least. An encouraging 92% of adults have at least one spare tyre, and only 15% have continued to drive on spare tyres because they couldn’t afford a new one.

Here at Canstar Blue, we understand that tyres are an expensive necessity, so we want to help you find the right tyre, from the right retailer. We have asked everyday New Zealanders about their experience with car tyre retailers to find what consumers are satisfied with. The results for 2015 are in, and we are pleased to announce that Tyrepower is the award-winner of Canstar Blue’s Most Satisfied Customers Award for Car Tyre Retailers.

Tyrepower was founded in 1977 with the purpose of offering customers a “flexible and good value tyre service”. After 38 years, Tyrepower continues to impress Kiwis, winning our Most Satisfied Customers Award for the first time.

Beaurepaires is a home grown New Zealand company founded in 1985. Today they have 66 stores nationwide and remain 100% New Zealand owned.

Bridgestone is the world’s largest tyre retailer with stores in over 150 countries. For the purpose of this comparison, Bridgestone includes Bridgestone select and their subsidiary, Firestone.

Goodyear offers a range of standard and performance tyres. Launched in New Zealand in 1918, today they have over 90 stores nationwide.

Tony’s Tyre Service is a locally grown tyre retailer that promises the best value tyres. In fact, their website guarantees they will beat any local competitor by $10 (Correct at time of publication).

Budget Tyres is a small company with only one retail location. They pride themselves on the “speed and efficiency” of their services and offer a range of new and used tyres.

Canstar Blue commissions Colmar Brunton using the SSI panel to regularly survey 2,500 New Zealand consumers across a range of categories to measure and track customer satisfaction. The outcomes reported are the results from customers within the survey group who have purchased car tyres from a car tyre retailer in the last 3 years (e.g. Beaurepaires, Goodyear, Tyrepower) – in this case, 1,685 New Zealanders. Please note this relates to the business where car tyres are purchased from, not the tyres themselves.

Brands must have received at least 30 responses to be included. Results are comparative and it should be noted that brands receiving three stars have still achieved a satisfaction measure of at least six out of 10. Not all gym brands available in the market were compared in this survey.