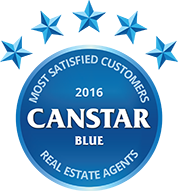 Baleys has shown massive improvement in the short space of 12 months. The company has climbed to the top of our customer satisfaction ratings with five stars across most criteria.

Canstar Blue research commissioned earlier this year found that more than half (52%) of the survey group had moved house in the last three years – so chances are that many of you reading this might also move house in the not too distant future. Whether you’re renting, buying or selling, navigating the property market is always tricky – that’s why we leave it to the experts.

Real estate agents are equipped with the knowledge and experience to help you find the right home, or to help maximise the return on your asset. Regardless of whether you’re a home owner or tenant, dealing with property involves mammoth financial decisions – so how do we find the best agent to help us through?

To help give New Zealanders more confidence in choosing a real estate agent, Canstar Blue commissioned research into customer satisfaction with the country’s leading firms. After surveying nearly 1,000 Kiwis nationwide, we can report that Bayleys was the only real estate agent rated five-stars for overall satisfaction.

The New Zealand property market has seen some incredible price growth in recent years. In September 2016, the average value of a house in Auckland hit NZ$1m for the first time – twice what it was 10 years ago. At a national level, the average value increased to $622,309.  This is of course great news for investors and home owners, but young kiwis will be growing concerned that they will be priced out of the housing market And it’s a phenomenon that is being recognised on a global scale.  In September 2016, UK media agency, The Guardian reported Auckland as being “the hottest property market in the world”

But what goes up must come down. Some have speculated a housing market crash is inevitable, creating massive debt and unemployment, 11% of Canstar Blue survey respondents agreed and are holding out in the hopes house prices will fall.

The government has implemented a number of measures to reduce the severity of these housing issues. The main initiative ‘Loan to Value Ration, LVR for short, dictates a 20% deposit or for residential purchases and a 40% deposit on investment properties. Evidence suggests this has had some effect, but it’s a long-ball game and only time will tell if it can help cool the market. But if you can’t wait to buy a house and are prepared to branch out to new areas, there are still many towns and cities across New Zealand flourishing with both opportunity and affordable housing.

Let’s take a look at the real estate agents that featured in this year’s customer reviews:

Bayleys began in Pakuranga, Auckland as a small family business and expanded into a well-known and trusted agency both domestically and internationally. Bayleys says it’s an expert in the marketing and sale of a wide range of properties, including commercial, agriculture and residential.

Barfoot & Thompson is a family owned and run business with over 90 years of experience. The company’s website claims that one in three Auckland homes are sold by them.

First National began in Australia in late 1981 and expanded to New Zealand in 1985. First National claims it’s the first stop for tens of thousands of property buyers and sellers across New Zealand. It says it puts its customers first by being fast, experienced, social and proactive and more.

Harcourts says it is a progressive real estate agent that understands the needs of its clients and puts that first. The company began way back in 1888 and has since expanded international agency.

LJ Hooker says it is one of the largest property managers in the Asia-Pacific, with more than 700 offices and 8,000 staff across Australia, New Zealand and seven other countries in the region.

Professionals say it is a group of independent New Zealand-owned businesses operating under the same recognised name. Professionals promises to work harder than any real estate company to earn your trust.

Ray White says it is the ‘clear leader’ in residential sales across Australasia and Indonesia. The company’s website says it has nearly 1000 individually owned and operated offices with over 13,000 staff across Asia-Pacific.

Canstar Blue commissioned I-view to survey 2,500 New Zealand consumers across a range of categories to measure and track customer satisfaction. The outcomes reported are the results from customers who have used the services of a real estate agent in the last 3 years – in this case, 978 New Zealanders.