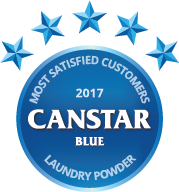 This plant and mineral based powder shines as the only brand to receive five stars for overall customer satisfaction.

Laundry detergent is something we all need, but as our understanding of the impact we have on the world around us increases, over one third of us try to do our bit for the environment by opting for an eco- friendly product.  In addition 31% of people are conscious of what they expose their own body to and choose a low irritant brand that is kinder to sensitive skin.

But what else is it that we value when it comes to keeping our whites white and our colours fast?  In our recent Canstar Blue survey we asked 1,804 people what they looked for in their laundry powder… 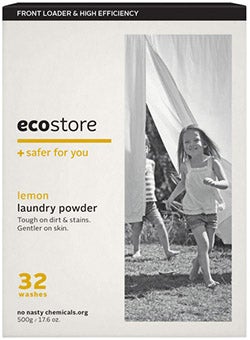 Feel of clothes after wash

This rated as one of the highest drivers of satisfaction in the survey.  It turns out we don’t just want our clothes clean, we want them to feel good too and our guess is that people aren’t pining for the starched crunch of Grandma’s bed sheets kind of sensation either!

Ecostore was the only brand to record a maximum five stars in this category.  Earthwise, Surf, Pams and Persil scored four stars with the remaining brands all scoring three.

There’s nothing worse than getting a huge stain on your favourite top, sticking it the wash and finding it’s still there, stuck fast and drawing obvious attention.  There is nothing worse than clothes that come out of the wash still looking dirty and this is probably why quality of clean also rated as one of the most important qualities among those we surveyed.

Ecostore was joined by Persil on the five star podium for quality of clean with all other brands scoring four, with the exception of Countdown Homebrand who registered three stars.

We always like to think we’re getting bang for our buck, but when it comes to our laundry powder this isn’t as high up the priority list.  For the budget conscious, Pams came top of the pile scoring a maximum five stars with Coldpower, Earthwise, Fab, Shotz, Surf, and Countdown Homebrand scoring four stars.  Drive, Persil and Ecostore scored three stars.

According to scientists, we have the ability to smell over a trillion different odours.  For many of us one of our favourites is the aroma of freshly laundered washing so the fragrance of our detergent is pretty significant.  Our survey revealed that for women, fragrance (or scent) was slightly more important than for men, but maybe that’s because the scientists (yes, the same ones!) say that women have a better sense of smell than the opposite sex.

As well as packaging a product in a way that’s robust, easy to store and generally helpful to consumers, for our five star winner of this category, Ecostore, it’s also about minimising waste, recycling and using recycled materials whenever possible.  The remaining brands scored four stars apart from Countdown Homebrand, Drive and Pams scoring three stars.

As a product born from a realisation of the volume of chemicals contained in many detergents, Ecostore, this year’s winner of the Canstar Blue overall satisfaction award for laundry powder, rated an unsurprising five stars in this category.  They assess all of their ingredients for health and environmental impacts before using them, an approach many consumers like too.  Earthwise rated a respectable four stars.  All other brands rated three stars.

Canstar Blue commissioned I-view to survey 2,500 New Zealand consumers across a range of categories to measure and track customer satisfaction. The outcomes reported are the results from customers who have purchased and used laundry detergent (powder) in the last 3 months – in this case, 1,804 New Zealanders.