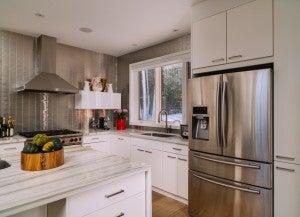 The fridge is actually an Australian invention.  James Harrison built the first commercial fridge as an ice-maker in Geelong.  Since then fridges have become a ubiquitous feature of every home – but that doesn’t mean that refrigerator innovation has stopped.

A recent invention is a door inside your fridge that you can store often-used items.  Think of it as a fridge within a fridge.  The benefit of this design is that it avoids letting warm air into the rest of your fridge, saving you energy.

Antimicrobial drawers are another recent innovation.  By using microbe inhibiting technology the growth of bacteria and fungus is hindered, keeping your food fresh for longer.  Some fridges have also had special lights fitted to the fresh produce drawers.  These lights promise to mimic the effect of the sun and keep fresh food from starting to decay.

There’s even research being done into a refrigerator with no moving parts and no energy usage at all.  Instead, the idea is to use a bio-polymer gel which holds food and prevents microbial growth.  It looks like nothing more than a giant panel of jelly with bits of food stuck in it.

At the other end of the tech spectrum, a remarkably effective low-tech solution to electricity supply problems has been proving remarkably useful in India.  In order to deal with blackouts that can sometimes last days at a time, Mansukhbhai Prajapati developed a fridge that can keep food cool with only water.  The fridge is made of clay and has two shelves for keeping food.  Above this is a compartment that contains water which then drips down the sides of the fridge.  As the water evaporates, it whisks away heat, cooling the food contained within.  It may be low-tech, but it works!

How often should you clean out your fridge?

One piece of innovation that hasn’t yet been invented is a fully self-cleaning refrigerator!

Try as hard as we might, we’ve all had that moment when we’ve discovered a year-old tub of yoghurt or a jar of pickles older than some historical monuments.  Leaving food which is long-out of date in your fridge can be a serious problem, cross-contaminating your food and potentially causing food poisoning.  So how often should you clean your fridge?

It’s generally recommended you go through your fridge at least once a week to throw away expired food and clean up any spills or stains.  You should avoid using solvent or abrasive cleaning products inside your fridge as this can damage it and create an unpleasant taste in your food.  Instead, if you don’t have a cleaning product specifically designed for fridges, use a mixture of water and vinegar for best effects.

You should also give your fridge a proper clean at least a couple times a year.  Wipe the exterior surfaces with a mixture of water and dishwashing liquid and clean the interior with a mixture of a tablespoon of baking powder and half a litre of warm water.  This will avoid leaving unpleasant odours and tastes behind while making sure your fridge is nice and clean.