Compare some of the best dishwasher brands using our customer satisfaction ratings.

Show Important Notes^* Hide Important Notes^*
* Overall satisfaction is an individual rating and not a combined total of all ratings. Brands with equal overall satisfaction ratings are listed in alphabetical order. Hollow star ratings are awarded where brands do not receive the minimum number of responses for that criteria, however achieve at least the minimum sample required for all other criteria. 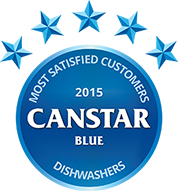 The results are in, and for the fourth year in a row, Bosch has been awarded the Most Satisfied Customers Award for Dishwashers – making it one of our longest running consecutive award winners.

Bosch washes up the competition for the fourth consecutive year

Nearly three quarters of survey respondents claim a dishwasher is a ‘must have’ in any household. So is it time that you upgraded yours?

We’ve surveyed New Zealanders to find out what they think about their dishwasher purchases. The results are in, and for the fourth year in a row, Bosch has been awarded the Most Satisfied Customers Award for Dishwashers – making it one of our longest running consecutive award winners.

Bosch also received 5 stars in performance, quietness, internal layout, ease of use and design. Following were Samsung and Westinghouse with an admirable 4 star rating for overall satisfaction.

Dishwashers are handy appliances, and all it takes is to simply stack the dishes, press a button and relax… or so many New Zealanders think.

According to our latest research, more than a quarter of shoppers don’t realise that dishwashers require cleaning. Happily, this is easily remedied. One New Zealand blogger explains that it’s just a matter of packing inside a dishwasher-safe container filled with 1 cup of vinegar, and then running your dishwasher through a cycle on the hottest setting.

We spotted some more naughty behavior in these results though. For example, slightly fewer than 1 in 5 respondents said they don’t rinse their dishes before stacking the dishwasher. Shockingly, almost half of New Zealanders reported that no one in their house ever wants to empty the dishwasher.

Amusingly, 13% admitted they don’t actually unload their dishwasher … they just take clean things out as they need them. This was especially true of younger New Zealanders (24%).

More about our survey results

Bosch
As mentioned, Bosch performed extremely well, receiving 5 stars in everything except value for money and warranty, both of which receiving 4 stars.

Westinghouse
Westinghouse received an outstanding 5 stars for their design and for value for money. They also received a 4 star rating for overall satisfaction.

Samsung
Samsung performed well across the board, having received 4 stars in almost every criteria, including overall satisfaction.

LG
LG received an admirable 3 stars for overall satisfaction. LG did one better for value for money, internal layout, ease of use, warranty and design: 4 stars in each area.

Simpson
Simpson received a 3 star rating for overall satisfaction in 2015. Simpson also received a good score of 4 stars for quietness and warranty.

Fisher & Paykel
Fisher & Paykel were awarded 3 stars in overall satisfaction. For value for money, internal layout, ease of use, warranty and design, Fisher and Paykel received an admirable 4 stars.

Haier
Haier performed admirably across the board, receiving 3 stars for most categories including overall satisfaction.

Our team have collated the Aussie homemakers’ insights over several years regarding the best dishwasher brands. Here are the rankings for 2015:

Bosch received 5 stars for performance, quietness, internal layout, ease of use, and design, getting four in all other areas and 5 stars overall.

Canstar Blue commissions Colmar Brunton using the SSI panel to regularly survey 2,500 New Zealand consumers across a range of categories to measure and track customer satisfaction. The outcomes reported are the results from customers within the survey group who have purchased and used a dishwasher in the last three years – in this case, 701 New Zealanders.