You are viewing the archived results for broadband. Follow the link to view the current broadband ratings.

Looking for a better deal on your broadband? Let Canstar Blue help with our customer satisfaction ratings. 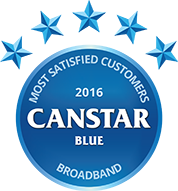 2degrees is one of the newest broadband providers on the block, but that hasn’t stopped it from delivering exceptional service to its customers, receiving five stars across almost all criteria, including overall satisfaction.

The internet undoubtedly plays a central role in most of our lives, whether it’s for socialising, entertainment or business, we are consuming more internet now than ever before. The latest broadband report by Statistics NZ found that in the month of June 2015, New Zealand used 84,000 terabytes of data – around 45GB per household and an increase of 143% compared to June 2013.

Most of this growth is attributed to the growing popularity of video streaming services. According to Canstar Blue research, 22% of New Zealanders are subscribed to a paid video streaming service, which are notorious for chewing through a lot of data. This is again reflected in the statistics published by Statistics NZ which reports the number of uncapped broadband plans have more than quadrupled to 628,000 in 2015, up from 155,000 in 2014.

This growing demand has led many telcos to invest in infrastructure and seek out innovative new ways to bring customers affordable internet. So if you haven’t reviewed your broadband plan in a while, chances are there is something better on the market.

Canstar Blue is dedicated to helping consumers find the best broadband provider for their needs – and what better way than asking for the opinion of fellow Kiwis? After commissioning a nationwide survey, we can announce that 2degrees has topped our customer satisfaction ratings in 2016. 2degrees is one of the newest broadband providers on the block, but that hasn’t stopped it from delivering exceptional service to its customers, receiving five stars across almost all criteria, including overall satisfaction.

Are we addicted to the internet?

Our research has revealed that Kiwis spend on average 3.2 hours a day on the internet (that’s almost one whole day per week), with young people and Auckland residents among the largest internet users. The research also presents some interesting insights into New Zealand’s attitude and behaviour toward the internet.

Broadband in New Zealand can be broken down into three types: ADSL, VDSL and Fibre.

Fibre is generally considered to be the fastest widely-available connection type, followed by VDSL and then ADSL. Below are the general estimates of download speeds per connection type, though keep in mind that not all connections are the same and that speeds often vary considerably.

Price and availability are of course the biggest factors when it comes to your broadband plan. Prices are mostly determined by data allowance sizes, however some telcos do charge differently depending on the connection type. Despite fibre being the fastest, it is sometimes the cheapest too, as some broadband providers are actively encouraging eligible residents to shift away from the old copper network.

When comparing prices, it’s important to know monthly broadband charges are expected to rise across the industry in 2016 by around $5 for ADSL and VDSL connections, and around $1 for fibre connections. This is due to government levies and a larger than expected increase in networking costs imposed by Chorus – the company who owns the existing copper network.

2degrees launched in 2009, making it New Zealand’s youngest full service telecommunications provider. It offers two broadband plans in either fixed term or month-by-month contracts, designed to be flexible and affordable. The first plan offered by 2degrees includes 80GB for $69.95 per month, while the second provides unlimited data for $89.95.

Orcon says it prides itself on its team’s passion for providing world-class internet. Orcon offers two data plans – 100GB for $80.95 per month and unlimited for $90.95 per month. Orcon offers free standard installation and modem rental for new broadband customers, as well as one month free broadband for customers with a fibre connection.

Slingshot was rated five stars for overall satisfaction in 2014 and 2015. It has three broadband plans, starting at $69.95 per month for 100GB, then $79.95 for 150GB and an unlimited data plan for $89.95. To sweeten the deal, customers who sign up to unlimited broadband plans will also receive a free Android tablet.

Trustpower is a unique telco, offering customers everything from electricity to broadband. Its broadband plans are offered in four sizes: 50GB, 100GB, 250GB and unlimited data, with prices from $72.05 per month for 50GB up to $98.70 for VDSL unlimited. Trustpower offers a number of services and multi-policy discounts.

Spark has three data plans: 40GB, 80GB and unlimited, with prices varying considerably on the type of connection. Spark also offers customers a modem and standard connection for free when they sign up to a 12 month plan. In addition, Spark provides eligible customers a McAfee subscription, a Lightbox TV subscription and early ticket access to concerts and other events.

Vodafone offers a two data plans: 80GB and unlimited. For ADSL and fibre, prices begin at $69.99 per month for the 80GB, while the unlimited plans cost $89.99. VDSL broadband plans cost an extra $10 per month. Among other benefits, eligible customers who sign up with a Vodafone plan may also receive a free My Sky HDi every month.

Canstar Blue commissioned Colmar Brunton to use the ConsumerLink panel to regularly survey 2,500 New Zealand consumers across a range of categories to measure and track customer satisfaction. The outcomes reported are the results from customers within the survey group who currently have a broadband account in their name and pay the bills – in this case, 1,992 New Zealanders.

Brands must have received at least 30 responses to be included. Results are comparative and it should be noted that brands receiving three stars have still achieved a satisfaction measure of at least six out of 10. The ratings table is first sorted by star ratings and then alphabetically. A rated brand may receive a ‘N/A’ (Not Applicable) rating if it does not receive the minimum number of responses for that criteria.