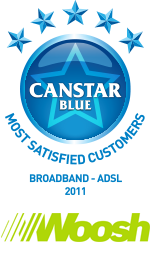 While the New Zealand population awaits high-speed internet infrastructure, more than two in five Kiwis feel they don’t get the data speed they’ve paid for.

Our latest survey reveals that Christchurch and Wellington residents are most sceptical – with 45% of respondents saying their internet speed is not up to scratch.

The results also show that 33% of Kiwis have noticed their children use broadband more than they do.

There are many factors that need to be considered when choosing an ISP (internet service provider), and our star ratings can help point you in the right direction. True to their name, Woosh have swooped in and taken out our most satisfied customers award for broadband providers.

Our results also saw that more than 84% of New Zealanders support the government’s plans to spend $1.5 billion dollars on broadband infrastructure.

The ultrafast broadband plan will serve three quarters of the New Zealand population. In the first six years of development, the government plans to concentrate on businesses, schools (ultimately including 99.7% of all New Zealand students) and health services.

Canstar Blue commissions Colmar Brunton Australia to survey 2,500 New Zealand consumers across a range of categories every few months to measure and track customer satisfaction. The outcomes reported are the results from customers of broadband providers within the survey group. To qualify, the customer must have a broadband account in their name and pay the bills.

Results are comparative and it should be noted that brands that received three stars have still achieved a satisfaction measure of at least six out of 10.

Woosh swooped in and received five stars for overall satisfaction. Orcon, Slingshot and Vodafone NZ all received four stars for this criteria while Telecom and TelstraClear received three.

Woosh returned with another five stars – this time for most satisfied customers for price. Orcon and Slingshot both received four stars while Vodafone NZ, Telecom and TelstraClear all received three.

Technical support from trained professionals is always a welcome relief to anyone who has battled a virus or a malfunctioning modem. Woosh received five stars for their tech/after sale support, while Orcon and Vodafone NZ received four stars. Slingshot, Telecom and TelstraClear all received three stars for their tech support.

The speed of internet connections is crucial for online gaming, streaming movies or simply supporting a family of users all surfing the web at once. Orcon received five stars for speed in our survey, while Woosh, Vodafone NZ and TelstraClear received four stars. Slingshot and Telecom weren’t far behind with three stars.

Both Woosh and Orcon received five stars for billing practises. Slingshot and Vodafone NZ were next with four stars each, while Telecom and TelstraClear followed with three stars each.

Woosh emerged as number one for download quota with their customers, while Orcon, Slingshot and Vodafone NZ received four stars for their own quotas. Telecom and TelstraClear weren’t far behind with three stars each for their value for money.