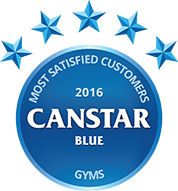 CityFitness in good shape at the top of our gym ratings

We all want to look good and feel great, and for many, that means hitting the gym. Sure, there are plenty of other ways to exercise, but there’s nothing quite like the supportive atmosphere of a gym to help you achieve your health and fitness goals.

Whether your goals are to get fit, lose weight or build muscle, finding the right gym is an important decision, as signing up to one that’s not right for you could mean you’re being held back from achieving your best results. That’s why Canstar Blue has endeavoured to help by asking gym-goers how they rate their gym of choice based on key satisfaction criteria, including value for money, equipment and facilities, group classes, flexibility of membership, staff availability and social atmosphere.

The survey brought varying results for the big chains, with one standing out from the rest again. For 2016, we can announce that CityFitness has been rated five stars for overall gym-going satisfaction and retains the award it first picked up last year.

CityFitness has 25 clubs across New Zealand (20 on the North Island and five on the South), all with 24/7 access for members. Membership plans are flexible and range in price and benefits, meaning there’s something to suit all kinds of needs.

How often do you go to the gym?

Finding the willpower to go to the gym can be an achievement in itself. According to our survey, 27% of gym members don’t go to the gym as much as they thought they would when they first joined. Yet despite this, more than three-quarters (77%) of gym-goers are still making the effort to go to gym at least three times per week, while nearly all respondents (95%) claimed to go to gym at least once a week.

Of course, we all have different attitudes to working out – 14% of survey respondents only go to their gym for its classes, while 27% prefer to go with a friend rather than by themselves.

When it comes to why we go to the gym, 46% of adults said it was to improve their fitness, while 31% cite weight loss as their motivation, 16% want to gain muscle, and only 2% said it was because of a new year’s resolution.

How much do gyms cost us?

Most gyms only offer fixed-term contracts for a year, but some can also offer month-to-month deals. But if you don’t ask, you might not get. It’s usually the case that fixed-term contracts have lower membership fees, with the catch of course being that you can’t leave without paying a penalty if a better deal comes along.

As part of our research, we asked New Zealand gym members how much they’re spending each month on membership and found the average spend to be $58.77.

If you’re considering joining a gym, also remember there may be one-off signup and security fees – potentially costing a couple hundred dollars. Fortunately, many gyms often scrap the sign-up fees during sales events, so keep your eye out for good deals as they come along.

If you go anywhere with other people, there will almost definitely be a few things about them that bug you – and the gym is no exception unfortunately. Curious about this, we asked New Zealanders what their biggest pet hates are and found the following:

Most gyms are pretty open to constructive feedback, so if you have any of these pet-peeves, leave a message for your gym and they should at least try to address it. If you’re unhappy with your club’s response, then we hope our customer ratings help you make the switch to a gym that better suits your needs.

Canstar Blue commissioned I-view to survey 2,500 New Zealand consumers across a range of categories to measure and track customer satisfaction. The outcomes reported are the results from customers within the survey group regularly visit a commercial gym where they pay a membership fee – in this case, 429 New Zealanders.