Compare TVs in New Zealand with Canstar Blue. Panasonic, LG, Samsung, Sony and Veon are compared on value for money, performance, ease of use, warrant and service, other functions and overall customer satisfaction. 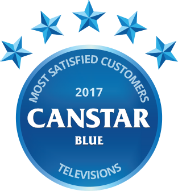 One of the most recognised television brands in the world, Panasonic tops Canstar Blue’s customer satisfaction ratings for new TVs.

It’s hard to believe that full time TV broadcasting was only introduced to New Zealand in 1960, but we’ve come a long way since then. The daily five hours of broadcasting and test screens to make sure you were correctly tuned in have been replaced with 24/7 coverage of everything from watching people watching TV, to up-to-the-minute news coverage from every corner of the globe. Black and white screens have been long consigned to the history books and replaced with a catalogue of TVs with acronyms and abbreviations such as LCD, LED, OLED, HDR, 3D and 4K.

So if you’re in the market for a new TV, what is it you should be looking for? To start, there are a couple of things you need to think about before you even set foot in a store.

If you’re not sure what you’re after, or even if you are but would just like to find out a bit more, Canstar Blue’s TV review and ratings can give you a head start when it comes to buying a new TV.

To find out which TV brands are rated highest in New Zealand, we surveyed more than 845 consumers who have purchased a new TV in the last two years. Respondents were asked to review their new TV based on a range of factors. Five leading brands received the minimum sample size required to be included, but only Panasonic received an overall five-star review. Panasonic rated five stars across most categories, with the exception of value for money and other functions, where it rated four stars.

So what qualities did people rate?

So apart from the qualities and features above, what do you need from your new TV? There are so many different acronyms flying around these days (a few were mentioned earlier), it can be hard to keep up, so here’s a quick guide to help you get up to speed.

3D (or three dimensional) TVs make it feel like you’re part of the action. The 3D glasses many of the TVs come with will enhance your experience, but unfortunately many TV channels and movies are not produced with 3D in mind, vastly limiting your choice.  Luckily you can watch 2D or ‘normal’ TV on your 3D TV but obviously you’ll not get the same ‘part of the action’ experience.

While it’s a common belief that they are different types of television, LED and LCD technically refer to the same type of TV, but the acronyms refer to different parts.

LCD is probably the most commonly found type of display in any electronic gadget but older LCD TVs use fluorescent lights to light the display which are generally placed behind the TV screen. More recent LED TVs use diodes (a specialist electronic component) to generate light and these can be placed behind or around the edges or a screen. The end result is that LED TVs can have a slimmer profile while also delivering potentially greater energy efficiency.

4K TV have four-times the resolution of regular HD (high definition) TVs. Basically this means that with a 4K TV there are four pixels (or dots of colour) in the same space as a single pixel on a HD TV. As you would expect this gives a better quality picture, with more rich and clear detail, great for those blockbuster movies and sports where every detail counts.

Smart TVs can connect to the internet and many have their own browser and apps for services like YouTube and Netflix, among other services. With many smart TVs you get access to PVR (personal video recorder) and digital tuners with digital TV guides. Basically, smart TVs are a good ‘one stop shop’ for the ultimate in TV entertainment, allowing you to watch regular TV, download streaming services such as Netflix and access catch-up TV.

Which brand should you go with?

The winner of Canstar Blue’s 2017 customer satisfaction award for TVs, Panasonic is one of the most recognised brands around the world. Panasonic is still a tech-forward company boasting a large range of TVs with 4K resolutions, and various technologies designed to make the viewing experience better.

Samsung is perhaps one of the most popular TV brands out there with its range of innovative and quality TVs. Its flagship technology is its ‘quantum dot’ or QLED (similar to, but obviously not the same as OLED!) display, creating richer and deeper colours.

Sony is a longstanding brand in the TV world. Frequently boasting new technologies and known for its tech-forward approach, Sony earned four stars for overall satisfaction and five stars for performance. Its TVs also tend to be a little more expensive than other brands but the bonus is that smart functions come pretty much as standard.

Another household name, LG boasts a large range of TVs, incorporating everything from regular HD TVs through to high-end 4K TVs, and OLED. They also like BIG TVs, producing TVs with screens going up to an enormous as 86”!

Launched in New Zealand in 2011, Veon TVs are the budget option sold exclusively through The Warehouse. The brand keeps costs down by only offering only a limited range and by using the same Chinese supply chains and manufactures as many ‘high end’ brands. Veon was the only brand to achieve a five star rating for value for money in the Canstar Blue survey.

A quick internet search revealed that TVs in NZ range in price from $199 to over $15,000, so ultimately only you can decide which TV is best for your budget, but we hope our ratings provide some help along the way.

Canstar Blue commissioned I-view to survey 2,500 New Zealand consumers across a range of categories to measure and track customer satisfaction. The outcomes reported are the results from customers who have purchased a new TV in the last two years– in this case, 845 New Zealanders.