You are viewing the archived Pie ratings. Follow the link to view the current Pies ratings page. 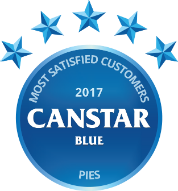 It doesn’t seem to matter where you go in New Zealand, a savoury pie is never far away. Gourmet or garage bought, we just can’t get enough of them, and it’s the meat and cheese combo that gets the taste buds tingling for a lot of us.

That great old combination of steak and cheese took the honour of being the nation’s favourite (28%) in our latest survey, but it had better be careful because mince and cheese is giving it a run for its money, coming a close second at 27%!

Pies are part of Kiwi culture, according to 70% of the people we spoke to. The golden pastry and hot fillings oozing out with every bite you take are a real treat, but for one in five people, still something they eat at least once a week.

When it comes to making our own, more than half of us aren’t too keen. In fact 54% of us have never even tried. Maybe it’s the skill involved in making great pastry or getting the right amount of filling, or maybe it’s because our favourite readymade pies are just so good.

Over one in four (27%) of us would make a special journey to buy the pie we love, but what qualities are we looking for in our little savory treats? Our research identified the following drivers of overall customer satisfaction:

Once we’ve found our favourite, two in five of us don’t stray, buying the same flavour pie every time.

Canstar Blue commissioned I-view to survey 2,500 New Zealand consumers across a range of categories to measure and track customer satisfaction. The outcomes reported are the results from customers who have purchased and eaten pies in the last three months – in this case, 1,942 New Zealanders.