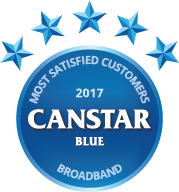 Challenger NZ broadband provider Flip has beaten out the big guys in Canstar Blue’s 2017 customer ratings. Flip was a standout performer, rating five stars for service, bill clarity and value for money, amongst other things.

We New Zealanders love a good browse on social media, online gaming session, or streaming binge. Whether you like it or not, the internet has become such a central part of our lives and the World Wide Web has probably been the handiest invention of the last 30-odd years. From sending Nanna a birthday message on Facebook, to bingeing on Netflix, to sharing memes and funny news articles with your mates, the internet is very useful indeed. For example, a massive 62% of Kiwis have used overseas online shopping websites from the comfort of their NZ home. Whether we’re all getting a bad deal down under, or we just like the convenience, it’s nevertheless a telling statistic.

Evidently, Kiwis love the internet, but many of us have no idea what actually goes into a home broadband plan, what our money can get us, and whether we could save by switching providers. A significant 42% of respondents to our latest survey have no idea how much data they use every month. That’s not a good start if you want to get the best deal possible for your usage.

This obviously could play into the hands of internet providers, convincing users to hop into an expensive unlimited plan, but many of us might be able to get away with much less data and subsequently save a few bucks. Broadband providers can help their customers pick the plan that best meets their needs, so it’s wise to look at a wide range of options before signing up.

So which broadband providers are highest rated in NZ? To find out, Canstar Blue surveyed almost 2,000 households across the country to see what they think about their internet provider, with their feedback reflected by the star ratings you see above.

Seven major broadband providers featured in the results, but Flip was the only one to receive a five star review for overall customer satisfaction. It also excelled in regards to customer service and value for money, amongst other things. It’s an exceptional result for Flip, beating out the country’s biggest providers in the first year it has featured in our broadband ratings. To be included in the ratings, providers must meet our minimum sample size requirements. Flip may be a smaller provider than others, but its customers obviously like what they’re getting.

To help you pick the best broadband plan for your needs, let’s get an overview of the seven providers in this year’s ratings.

Flip is a relative newcomer in the NZ home broadband scene, launched in 2012. It spans a wide range of areas, covering most of the country and has recently invested millions in its network to provide better service to customers. In general you can expect its entry-level plans to cost a bit over $50 a month, with modems and call packs as optional extras. Furthermore, most of its plans are on a no-contract basis, affording you the flexibility to leave if you’re not entirely satisfied with your service.

Slingshot offers a wide variety of plans across ADSL, VDSL and fibre connections. You can also add a homeline from an extra $5 a month. For the whole package, Slingshot also has a range of mobile phone plans. As for broadband, prices start at about $60 and you can then customise your plans to suit your needs. Slingshot was a solid performer overall in the ratings, achieving four stars in every category.

To a degree, 2Degrees offers some exciting plans. You simply choose your plan starting at about $75 a month, and then you add on home phone packs and speed boosts (if you have a fibre connection). 2Degrees also offers some great discounts from time to time, with discounts for mobile customers choosing a broadband plan, as well as heavily-discounted unlimited plans where you pay less for the first year of the contract. Evidently, many customers were satisfied with its network performance, and 2Degrees was the only provider to achieve five-stars in this category.

Orcon is a telco that specialises in the fibre optic broadband connection, and with superfast speeds with this technology, you can’t blame them. It’s also a company known for chucking in extra goodies with its plans, like Xboxes and Apple TV. Its standout plan is the ‘Gigantic’ plan, which has a theoretical capacity of 1 gigabit per second! This is simply outstanding and its real-world performance isn’t too far behind either, as you can expect download speeds of around 700-900Mbps. These speeds are available from $135 a month. Orcon achieved four stars overall in our ratings, but was rated only three for value, customer service and the clarity of your contract. It also surprisingly achieved four stars for network performance.

Known primarily for its energy plans, Trustpower also provides a range of solid broadband plans. Its plans primarily make use of the fibre optic and ADSL connections. Its home broadband is available from around $60 a month, and like 2Degrees you’ll get it cheaper for the first year of your contract then have to pay more later on. Trustpower only achieved three stars for overall satisfaction in our ratings, but did stand out for its customer service – it being a power company probably also helps with this.

Spark offers a wide range of plans on ADSL, VDSL and fibre connections. It also offers gigabit plans for Dunedin – named across the board as ‘Gigatown’. So if you’re from Dunedin then you’re in luck. Most of Spark’s plans come with unlimited data and start at around $95 per month. This is for both ADSL and VDSL connections, as well as the most basic fibre speed. For any speeds over 100Mbps, expect to pay over $100 a month. Gigatown plans are available for less than $100 a month though. You can also switch to a ‘naked’ deal for around $10 more a month. Spark achieved three stars in most categories in our ratings, except for network performance and contract flexibility, where it achieved four stars apiece.

Global telco Vodafone rounds out the list with three stars for overall satisfaction and for every category except network performance. Most of its plans are available either on a home phone bundle basis or a naked basis. Connections available consist of ADSL, VDSL, fibre and fibre X. Unlimited data is available for around $100 a month, but fibre tends to cost more, especially when you add a home phone package.

Although these brands tend to be the most prominent broadband providers in New Zealand, there are a handful of other providers that may be worth a look into. Keep an eye out for plans from providers like ‘Stuff Fibre’ and ‘MyRepublic’ that may offer a plan that’s up your alley. Nevertheless, it pays to shop around, so use that internet connection you love so much to see if there’s a broadband internet plan that’s right for you!

How much time do Kiwis spend online?

New Zealanders love using the internet, but what do we actually use it for? Well, most use it for online shopping and video streaming. In fact, we love our internet so much that we spend an average of 4hours 16 minutes on it a day. This is up from 3 hours  12 minutes last year! We suspect online streaming popularity has something to do with that statistic!

Gen Y spent the most time online, with 5 hours 22 minutes spent on average, while people from Southland spent the most time on the internet based on region – 4 hours 56 minutes. Aucklanders weren’t far behind, with a 4-hours 28minutes average. When you add this up over the course of a year, 4 hours 16 minutes per day is over 1,500 hours a year, or about 64 days spent online! What on earth are we doing with all this time spent on the internet?

So it’s well established that Kiwis love using the internet, but what type of internet are we using?

What type of internet are Kiwis using?

There are four main types of internet connections available in New Zealand, which are:

Canstar Blue commissioned I-View (owned by Ipsos) to use the ConsumerLink panel to survey 2,500 New Zealand consumers across a range of categories to measure and track customer satisfaction. The outcomes reported are the results from customers within the survey group who have an active broadband plan account and pay the bills – in this case, 1,963 people.