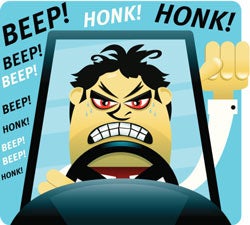 If you have ever parked your car and returned later to find it damaged, you could be excused for a few angry thoughts as chances are there will be no apology note in sight. According to a recent survey of 1,000 Kiwi Drivers by AA Insurance, two thirds of respondents have returned to find their parked car damaged at some point, and in 86% of those cases, the person who caused the damage did not leave a note.

It seems that we don’t like to be seen as dishonest though; the survey respondents were also asked how they would behave if they damaged a car and no one had seen them. Amelia Macandrew, Customer Relations Manager at AA Insurance said, “While the reality is that most people don’t leave a note, only one person in five was prepared to admit that they would not. There seems to be a huge disconnect between what people say they’ll do and what they actually do.”

According to a recent survey of just under 2,000 people by Canstar Blue Australia, there are plenty of other behaviours that get drivers a bit hot under the collar. Chief among these are drivers who fail to indicate, drivers who weave in and out of lanes, and those who drive too closely (tailgating).

So if you ever find yourself getting a bit hot under the collar while behind the wheel, here are a few tips on how to deal with driving stress, and protect yourself against aggressive drivers.

Treat others as you like to be treated: Try to be polite and courteous to other road users, even if those around you are struggling in that department. You have nothing to gain from being rude.

Keep track of time: Many road rage incidents are likely to occur when drivers are in a hurry and get frustrated. So if you have somewhere important to be, make sure you allow enough time for a few delays along the way.

Make yourself comfortable: You’re less likely to get wound up by other drivers if you’re relaxed behind the wheel. Make sure your seat is in the most comfortable position for you and the temperature is just right. And maybe try listening to some relaxing music.

It’s not all about you: Remember that some things are out of your control, including those annoying traffic lights that always turn red as you approach them. You can’t control the traffic, but you can control your reaction to it. Frustration, anger and impatience are often the biggest danger zones on the highway.

So what should you do if your car has been damaged?

If for some reason you can’t find these people, you must tell a police officer as soon as possible and no later than 60 hours after the crash.

If you are on the receiving end and there’s no note left at the scene, make sure you report the incident to both police and local businesses.

““Report the incident to the car park security or mall firm,” said Ms Macandrew from AA Insurance. “They may have CCTV footage that’s captured the entire event, which can help identify the person who damaged your car and wasn’t considerate enough to leave their details.”