Canstar Blue research finalised in March 2016, published in May 2016. 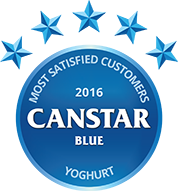 The results are in, and while several brands produced impressive results, one stood out from the yoghurt crowd – EasiYo.

It’s hard to imagine how anyone can dislike yoghurt! After all, it has so much variety and application, there’s bound to be something for everyone. Yoghurt can be enjoyed as a light snack, to complement a healthy breakfast, or as an ingredient for creamy meals and smoothies.

Yoghurt works with nearly anything, so it’s not surprising that almost half of New Zealanders (46%) regard it as an essential part of their weekly shop, our survey found. Additionally, 32% say they eat yoghurt every day. However, it seems that yoghurt consumption significantly increases with age, as only 24% of Gen Y respondents said they eat yoghurt every day, compared to 32% from Gen X. Baby boomers are the most frequent fans of yoghurt, with 44% enjoying it every day.

So which type of yoghurt do Kiwis like most? Well, more than half (56%) agreed that plain yoghurt was their favourite. In addition, a large portion of consumers are health-conscious when selecting their yoghurt, as a quarter (25%) of adults prefer low-fat options and a third (33%) have expressed an interest in probiotic yoghurts for the health benefits.

As for the brands we’re buying, 42% of respondents say they tend to just buy whatever is on special. While we can appreciate a bargain when we see one, it’s worth asking yourself if you’re really getting the best value.

To help consumers make the most informed decision, Canstar Blue has canvassed the opinions of Kiwis across the country to see how they rate the brand they most recently purchased. The results are in, and while several brands produced impressive results, one stood out from the yoghurt crowd – EasiYo.

EasiYo does yoghurt differently. Unlike other brands, EasiYo sells yoghurt powders in a wide range of flavours, which customers can use to make their own yoghurt at home.  Simply add water, shake and store. EasiYo says this technique doesn’t compromise on quality, claiming its yoghurts are packed with nutrients and no artificial ingredients.

Canstar Blue commissioned I-view to survey 2,500 New Zealand consumers across a range of categories to measure and track customer satisfaction. The outcomes reported are the results from customers within the survey group who have purchased and eaten yoghurt in the last three months – in this case, 1,817 New Zealanders.