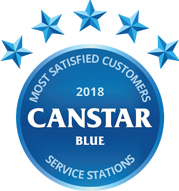 With an emphasis on down-to-earth service and value for money, this Kiwi owned network is definitely not running on empty.

For the second year running, Kiwi firm Challenge have been awarded the Canstar Blue Outstanding Customer Satisfaction Award, but what was it that made a lasting impression with customers?

Whether you prefer to do-it-yourself or have an attendant do it for you, pay-at-the-pump or go in and pay at the counter, for New Zealand drivers, the regular visits to the service (gas or fuel if you prefer) station is a way of life.  But just because topping up the tank is a necessity for most of us, that doesn’t mean we want our experience to be a basic one.

In our recent survey of 2,305 Kiwis, we asked what people liked about their service station and how they would rate them.  Although 59% of the people we surveyed said they would go to the service station that allowed them to use their supermarket discount vouchers, value for money was not the most important thing when it came to rating their experience.

Service was also sought after with 19% of the people we spoke to saying they preferred to fill up at a service station where the attendant was on hand to help.  Mainly owner-operated Challenge scored a maximum five stars in this area, the only brand to do so.

Facilities, value for money and range of other items were the final qualities that people rated.  With 65% of us spending upwards of $100 per month on fuel, value for money is obviously pretty important.  You don’t want to feel you’ve paid over the odds on a commodity that already feels expensive. And, if you’re filling up at the start of a long journey, or even part way through, that comfort break to nip to the loo and freshen up can also leave a lasting impression – good or bad! Local service stations are also pretty handy when we run out of the essentials such as bread and milk too, especially on public holidays when other stores may be closed.  Z Energy was the only brand to score five stars for facilities. Challenge scored four stars for their facilities and five stars for range (as did Z Energy).

At the time this article was written (June 2018), the global average price of gasoline was in the region of NZD$1.69 per litre.  In New Zealand, the average price was sitting around $2.32 which although makes us more expensive than the USA, Australia and Singapore, is still cheaper than many European countries.  Hong Kong is the most expensive at NZD$3.06 per litre.

The fuel market in New Zealand is a deregulated one meaning that the price we pay at the pumps is heavily influenced by the trading price for oil worldwide and the resulting fluctuations in price is something that 49% of us like to keep an eye on (with 50% prepared to drive up to 5km to get a better price).  But when you fill up your tank and pay for your fuel, what are you actually paying for? Surprisingly only 28% of the price you pay at the pump is for the fuel itself, the rest of the cost is made up of:

From 1 July 2018, Aucklanders will also be charged an additional 11.5 cents per litre of fuel.  The highly controversial tax is expected to raise $1.5 billion over the ten-year period it is being introduced for.  The extra revenue will contribute to extending and upgrading Auckland’s bus and rail transport links.

And how much do we spend on petrol each month?

With fuel costing some Kiwis up to (and in a small number of cases, over) $500 per month, it’s no wonder that some of us look to alternative, cheaper modes of travel.

Once only available in futuristic movies, electric cars are becoming commonplace in many countries across the world.

Fuelled by electricity that propels electric motors, these vehicles are simply charged up either at home or via a public charging station and then drive just like a traditional car. Popularity is steadily growing due to reduced fuel costs and positive environmental implications as a result of the reduction in carbon emissions. In our 2017 survey, 36% of respondents said they would consider buying an electric vehicle because they are cheaper to run and 40% would consider one because they are better for the environment.

Still relatively scarce in New Zealand, electric vehicle sales are slowly increasing and more charging stations are appearing up and down the country (good news for the 16% in our survey who said they wanted to see more charging stations).  In May 2016 the government also introduced the Electric Vehicle Programme which aims to increase the uptake of electric vehicles with a target of 64,000 on our roads by 2021.

If you would like to know more about electric vehicles in New Zealand, please visit transport.govt.nz.

Canstar Blue commissioned I-view to survey 2,500 New Zealand consumers across a range of categories to measure and track customer satisfaction. The outcomes reported are the results from customers who have refuelled their motor vehicle at a service station in the last month – in this case, 2,305 New Zealanders.