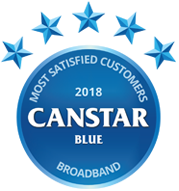 Skinny has topped Canstar Blue’s 2018 broadband provider ratings, earning five stars from customers across all research categories. No other provider achieved top results in any category.

We New Zealanders love a good browse on social media, online gaming session, or TV streaming binge. Let’s face it, the internet plays an integral role in all our lives – and we’d be lost without it. That’s why it has become so important to find the right internet provider and plan to meet your requirements. From sending Nanna a birthday message on Facebook to watching Netflix or Lightbox, to sharing memes and funny news articles with friends, you’ll need an internet provider that can deliver the network reliability you need, while providing top-notch customer service and value for money.

To help you decide which internet provider will be best for your personal circumstances, Canstar Blue conducts an annual review to find out how New Zealand’s telcos are rated by their existing customers. Think of it as like asking a couple of thousand of your friends how they’re getting on with their internet provider! So, which internet providers do Kiwis rate highest? We’ve sought the feedback of bill-paying adults right across our great country to form our customer satisfaction ratings.

Evidently, Kiwis love the internet, but many of us have no idea what actually goes into a home broadband plan, what our money can get us, and whether we could save by switching providers.

This obviously could play into the hands of internet providers, convincing users to hop into an expensive unlimited plan, but many of us might be able to get away with much less data and subsequently save a few bucks. Broadband providers can help their customers pick the plan that best meets their needs, so it’s wise to look at a wide range of options before signing up.

To help you pick the best broadband plan for your needs, let’s get an overview of the eight providers in this year’s ratings, showing the plans they offer and what you can get for your money. But first, here is a quick glance at some of the most interesting outcomes from our latest survey:

Skinny is the plucky ‘challenger’ brand taking on the big internet providers in NZ with some competitive broadband plans. Skinny offers dead-simple Wireless 4G and fixed line broadband plans. Base plans are as follows:

The two data-capped plans use a wireless 4G connection, while the unlimited plan uses a fixed line connection. With Skinny there are no lock-in contracts and no landline rental. With the wireless plans, Skinny says that you can be set up in less than five minutes. A 4G modem is from Huawei and costs $99 upfront with free delivery. Skinny received five stars for overall satisfaction as well as every other research category, including key areas such as value for money and network performance.

2 Degrees is one of the largest telcos in New Zealand, but keeps things relatively simple for customers. From traditional ADSL or VDSL to high-speed fibre, 2 Degrees has you covered for the same flat rates:

2 Degrees will place you on the best connection available, up to a 100/20Mbps fibre speed. You can also add on 900/400Mbps speeds for an additional fee and receive a discounted wireless modem if you sign up to a fixed-term plan. 2 Degrees mobile customers also receive $10 off their plan. 2 Degrees was rated four stars for overall satisfaction and also rated the same for key areas such as value for money, network performance and customer service. However, it fell down slightly in areas relating to billing and contract clarity.

Last year’s winner Flip got ousted by Skinny in 2018, but it still provides some solid internet plans. Flip is one of the cheapest internet providers in NZ, but these ratings look at more than just price. This is what you can get from Flip:

Flip comes with a cheap installation fee of $25 and you can buy or BYO your modem. Flip offers ADSL, VDSL and fibre internet plans, with the option to add on nationwide home phone calls for $5 extra per month. Flip rated four stars overall this year and also achieved four stars on value for money, clarity of contract terms, flexibility of contract and bill clarity. But it was let down with three stars for customer service and network performance.

Slingshot offers a wide variety of plans across ADSL, VDSL and fibre internet connections. You can also add a homeline from an extra $5 a month. For the whole package, Slingshot also has a range of mobile phone plans. As for broadband, plans are as follows:

The latter two plans come with unlimited data, but the dearest plan also boasts up to 700-900Mbps download speeds. The cheaper of the two offers speeds up to 100Mbps, but it all has to do with what connection is available in your area. Slingshot was rated four stars overall and four stars for every other category this year.

Trustpower was one of the first to offer energy plans as well as broadband plans. Nowadays you usually have to bundle your power to get access to its broadband plans, which shape up as follows:

Prices are accurate for Auckland, keeping in mind that different regions may face different rates. ADSL and VDSL internet connections are the same price, while a 100/20 fibre connection – if available – can cost $5 more. Adding in home phone calls can also cost $5 extra per month. Note that with Trustpower you often get bonuses for bundling energy and broadband, such as six months included broadband and so on. Trustpower was rated four stars overall and for every other category except flexibility of contract where it was rated three stars.

Orcon is another provider offering both telco and energy products, but its main focus still seems to be its broadband plans. Orcon has ADSL, VDSL and fibre internet plans, but there may be some difference as to what you’ll pay with different connections:

Orcon also provides incentives for bundling power in, with sign-up credits and more. It also offers mobile plans so you can have all your utilities on the one monthly bill. Orcon was rated three stars overall this year and for every other research category.

Spark is one of the largest telcos in New Zealand and on its website features a comprehensive plan builder. You can choose from three base plans:

The 60GB plan must be bundled with a home phone line, with ADSL, VDSL and fibre connections all available depending on where you live. Many 12-month contracts also come with a six-month Netflix subscription thrown in. Spark was rated three stars overall and for most other research categories, except for network performance where it was rated four stars.

Global telco Vodafone rounds out the list with a fairly concise list of broadband plans. ADSL, VDSL, Fibre and Fibre X plans are all available depending on where you live and it’s about $5-$10 extra to bundle in a home phone plan. Base plans are:

The only open-term plan is the home wireless plan, while the others come with either a 12 or 24-month term. Customers can also save further by bundling a mobile phone plan. Vodafone was rated three stars for overall satisfaction and for every other research category this year.

What about other providers?

Although these brands tend to be the most prominent internet providers in New Zealand, there are a handful of other providers that may be worth a look into. Keep an eye out for plans from providers like ‘Stuff Fibre’ and ‘MyRepublic’ that may offer a plan that’s up your alley. Nevertheless, it pays to shop around, so use that internet connection you love so much to regularly check out the latest deals.

Canstar Blue commissioned I-view to survey 2,500 New Zealand consumers across a range of categories to measure and track customer satisfaction. The outcomes reported are the results from customers who have a broadband internet account in their name and pay the bills– in this case, 1,987 people.